If you want to experience the thrill of an enchanting Roman walk, the Ancient Appia way is one of the most romantic itineraries in Rome to walk on but you can also take a bike if you prefer (rented on the spot).

It is appropriate to say that walking on the Appia way is like “stepping on history“, because it is one of the most antique roads in the world; on this path there have been innumerable battles and wars, one of them fought between the Roman army and the rebel slaves in the bloody riot of Spartacus, which ended with the crusade of 6000 rebels, in the Rome-Capua tract. This happened between 73 and 71 BC.

In ancient times, entry into the city was marked by Porta San Sebastiano (also called Porta Appia) inside which stands the Museum of the Walls where you can travel through the history of the construction of the Aurelian Walls.

At about 600 metres from Porta San Sebastiano, the church of “Quo Vadis” which is situated at the point where St. Peter met Jesus, before fleeing from Rome where persecutions had begun. Along the road, green rules; in fact from Porta San Sebastiano the Regional Park of the Ancient Appia way extends for more than 3000 hectares, in addition to Valley of the Caffarella and the area of ​​the Aqueducts.

On the right, in via Ardeatina, you will find the famous Fosse Ardeatine, the quarries of the massacre of more than 300 prisoners, in 1944, at the hands of the German troops.

If you want to continue on the Via Appia instead, you will find before the Catacombs of San Callisto, a cemetery complex among the oldest of the place, then those of S. Sebastiano and its Basilica, where according to tradition, the bodies of the apostles Peter and Paul were temporarily guarded during the persecutions.

If you love the villas, we advise you not to miss the ancient Villa of Maxentius, an archaeological complex consisting of three buildings: the palace, the circus and the dynastic mausoleum, created to celebrate the Emperor Maxentius. Inside the Circus of Maxentius stands the mausoleum of Romulus, the son of the Emperor, known as the “Tomb of Romulus“. The site is open to the public and therefore open to visitors.

Another villa that we urge you to visit is Villa dei Quintili, the largest Roman suburban villa, located in the area where, according to tradition, the battle between Orazi and Curiazi took place. 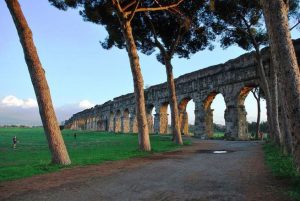 The ingenuity of Claudio Cieco, the Appian way engineer, led him to the construction of the Appian way in 312 BC to facilitate the passage of Roman troops to Capua.

he Appian way started from Porta Capena and connected Urbe to Capua, passing through Ariccia, Terracina, Formia, Minturno and Mondragone. It was interrupted at the level of Terracina with a navigable canal of 19 miles.
Only long afterwards was it extended to Brindisi, providing a direct link between Rome and the Orient, Egypt and Greece.

Walking this road, you will be walking on what in the distant 1st Century AD was defined by an illustrious poet such as Stazio, the “Regina Viarum“, The Queen of the roads.

Even Horace, the famous Lucan poet, during the journey from Rome to Brindisi (as a companion of Mecenate), recorded in the 5th Satira of the First Book of his Sermones a series of fascinating stories about what happened during the 360 ​​miles on the Appian way, to Brindisi: the precarious conditions in which that journey took place, but also the comedy of some anecdotes, including a reference to the annoying mosquitoes that then populated the Pontine marshes. The reclamation took place only afterwards with Trajan.
In 268 BC the Appia was extended to Benevento.

Along the Appian way, immerse yourself in the ancient atmosphere of the Roman Empire, imagine being one of the many travellers who travelled that road to reach a distant place, full of hopes and motivation.

The road your shoes will tread upon, once was a pavement in basolato [paving stones] (which you will still be able to see in the most ancient stretches today), whose name originates from the material from which it is composed: volcanic basalt, the great care and conservation of which aroused amazement and admiration from everywhere.

Those magnificent funeral monuments that you will meet along the pavements were mainly used to distract travellers from the boredom of the path, focusing their attention on something else.

The itinerary did not lack places to stop such as inns and hotels, impeccably managed by the “curatores” who were responsible for hosting and “caring” for the weary travellers, so that they regained their strength to get back on their journey.

Unfortunately, between the 9th and 10th centuries, the monumental system was affected by the action of man and time, until the Appian way was transformed into a quarry for raw materials, including those for the production of lime.

From the following century onward, all the Patrimony of Saint Peter began to leave the properties to the families of the Roman barons.

The Counts of Tuscolo transformed the tomb of Cecilia Metella, daughter of an important Roman consul, into a fortress and in 1300 Bonifacio VIII Caetani gave it to his family: around this majestic structure stands a fortified village. Following the duties on goods and travellers imposed by the Caetani, the need arises for an alternative route: the Appia Nuova is established from Porta San Giovanni.

Considered, for all these reasons, a site of historical interest, a protected area was established on 10th November 1988, with the aim of protecting these historical and architectural treasures: the Regional Park of the Appia Antica which covers about 3,400 hectares, along the municipalities of Rome, Ciampino and Marino.

Reaching the Appia Antica from the Casale

If you want to “step on the history” hidden along the Appian Way, you have to travel about 25 km from the Casale di Tormaggiore.

We suggest you rent a car (we can help you to contact the renter) or we can arrange a guided tour, including transport to the Appia Antica.

Want to find out more destinations for trips in and outside Rome? Click here and look at many other attractions >>