Ariccia: between Bernini and the Gattopardo

City near Rome: Ariccia, between Bernini and Gattopardo

Ariccia is a city ​​near Rome which boasts ancient origins.

Since the 4th century BC, Ariccia has been chosen as a holiday destination by the main personalities of Rome for its geographical position: a few kilometres from the capital, on a fresh hill 412 metres above sea level and halfway between two lakes (Lake Albano and Nemi).

This small city near Rome was bought in 1661 by the noble family of Chigi, who took over from the Savelli, and from that moment began a period of urban and economic renewal for Ariccia thanks to Pope Alexander VII Chigi, who entrusted to Gian Lorenzo Bernini the architectural redesign of the town.

Gian Lorenzo Bernini was the genius of Italian baroque: he designed the imposing colonnade that makes St. Peter’s Square, in Rome, unique in the world.

City near Rome: the art of Bernini in Ariccia

Palazzo Chigi and its Park

Palazzo Chigi is the ducal palace of this city ​​near Rome: a sumptuous baroque residence, among the most prestigious of the Roman countryside, built between 1664 and 1672 in a project by Gian Lorenzo Bernini, on an area of ​​about 10 thousand square metres.

Aerial view of Palazzo Chigi and its Park (photo from www.palazzochigiariccia.it) 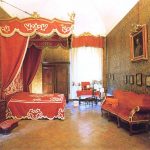 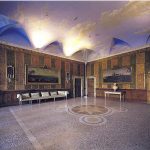 The Collegiate Church of Santa Maria Assunta is the main place of worship in Ariccia.

Pope Alexander VII, who wanted to build the church of his new “fiefdom” near Rome, in Ariccia, entrusted its construction to Gian Lorenzo Bernini, who took care of every detail between 1662 and 1664 (year of consecration of the Collegiate Church), including the furnishings.

For the Collegiate of this city ​​near Rome, Bernini took inspiration from the Pantheon of Rome, which is recalled in the round plan and the shape of the dome with occhialone and lantern.

Enter the Collegiate, stand under the dome and raise your eyes to the ceiling: in the dome cap, you can admire a game of stucco angels and hexagonal ceiling coffers that gradually shrink upwards and will give you an amazing three-dimensional effect.

The church is open to the public and can be visited during Mass and Sundays.

Even the monumental Piazza di Corte di Ariccia was designed by Bernini and his collaborators, starting in 1661.

Today it is called “Piazza della Repubblica” and remains the heart of this small city near Rome, the starting point for visiting the town. You will reach the square immediately after crossing the monumental bridge, the main access point to the town. The Ariccia Bridge is a mammoth three-arch bridge, 59 metres high, and is one of the major examples of 19th-century engineering.

The most important buildings of Ariccia look onto Piazza di Corte: Palazzo Chigi, the Collegiate Church of Santa Maria Assunta and the historic Locanda Martorelli.

The Locanda Martorelli is a very important symbol for the citizens of this city ​​near Rome: the building, in fact, houses the cycle of murals painted by the Polish painter Taddeo Kuntze, which illustrate the origins and the mythological past of Ariccia.

Between 1820 and 1880 the Locanda hosted many artists: painters, writers, poets and poets, Italians and foreigners, who through their works spread the image of the Castelli Romani throughout Europe.

Today the Locanda Martorelli is home to high-level art and documentary exhibitions.

City near Rome: the fraschette of Ariccia

If Ariccia, among the small cities near Rome, is one of the most famous is also for its gastronomic tradition, loved by tourists and the Romans.

Go to Ariccia and treat yourself to a typical meal, with healthy and homely cooking, in one of the legendary “fraschette”: small taverns that you find in a row, under the monumental Ponte di Ariccia or scattered in the alleys of the historical centre.

In the fraschette, the dishes are those of the Roman tradition (pasta alla carbonara, tripe alla romana, etc.), but you must also taste the local cold cuts: a must for those who eat in fraschette of this city ​​near Rome.

There are only 13 kilometres between Casale di Tormaggiore and the small town of Ariccia: also due to its proximity to our country house, Ariccia is an ideal destination for a half-day trip outside Rome.

Want to discover other cities ​​near Rome? Click here and look at many other attractions >>