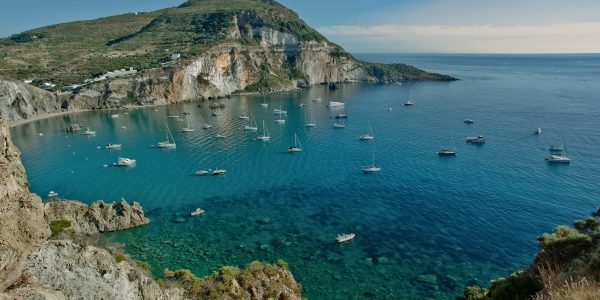 Not everyone knows that, a few kilometres from Rome, there are incredible pearls in the middle of the Tyrrhenian Sea.

Let’s talk about the Pontine islands (or Ponziane islands), an archipelago of volcanic origin that includes six major islands:

The landscape of these islands is mainly rocky in nature. Their coasts are a succession of enchanting bays and coves, ideal for enjoying peaceful days on the beach.

You can plan a day trip, taking a ferry or hydrofoil from Anzio (40 km from the Casale di Tormaggiore) to reach the Pontine islands.

Sea, nature and food are the wonders of the islands. We suggest you to arrange a local boat trip (in Ponza and Ventotene ports you’ll find many offers), then return to the island of departure and enjoy lunch of fish in a local restaurant 😉

Populated since the Neolithic age and today inhabited by more than three thousand people, Ponza is the main island of the Pontine archipelago, for historical interest and for tourism.

Its landscape is almost completely hilly and reaches a maximum altitude of 280 metres at Mount Guardia.

The volcanic origin of the island can be seen on its jagged and rocky beaches, composed of kaolin and tufa, and in the numerous extinct volcanic craters that are still recognisable today. 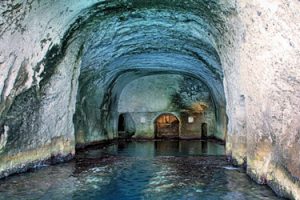 In ancient times, Ponza was an important Greek port in the Tyrrhenian Sea. It has a very rich ancient history, the numerous remains of which you can still appreciate today. In particular, numerous ancient boats are situated on the seabed surrounding the island.

Remaining on the surface (but not too much!), a 10-minute boat ride from the port and worth a visit is Pilate caves: a maze of tunnels connected by a central pool and all carved into the rock, along the coast, where crystal clear waters flow.

Part of the Pilato Caves today is submerged and they are not the only ones. It is no coincidence that the presence of submarine caves and cliffs attract thousands of underwater divers to Ponza every year.

With an area of ​​1.54 km², Ventotene is by size the smallest municipality of Central Italy, while it has little more than 760 inhabitants. 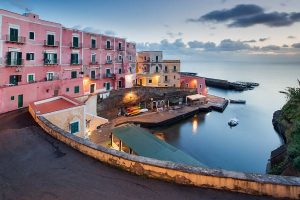 The island is very small, it is true, but it does not lack interesting sites that shouldn’t be missed: from its Roman port (under the rock on which the town stands the Romans dug cave-warehouses today used as shops), to the Bourbon village (built at the end of the 18th century that stands on three levels characterised by narrow alleys and crazy panoramic views), the castle (on the main square, initially had the function of military barracks), the Imperial Villa (or Villa Giulia, overlooking the sea, was the residence on the island of Emperor Octavianus Augustus and you can still see its premises and the descent to the sea made by digging in the rock), Roman cisterns (two huge reserves of fresh water built by the ancient Romans, where today you can still admire graffiti that reproduce everyday life).

In 1997 the State Natural Reserve of Ventotene and Santo Stefano was set up.

In the summer of 2016 the small and charming island of Ventotene hosted an international summit between the then Prime Minister Matteo Renzi, the German Chancellor Angela Merkel and the French President François Hollande.

Getting to the Pontine Islands from the Casale

As you may have guessed, the Pontine Islands are enchanting pearls surrounded by a wonderful, crystal clear sea .

Your holiday in Rome could be completed with a “boat trip” to this beautiful archipelago, that will excite you and let you see some lovely surprises…

To reach Ponza and the other islands from Casale di Tormaggiore, we suggest you to rent a car and reach the port of Anzio, 40 km from the Casale, and from there get a boat to the archipelago.

Want to find out more destinations for trips near Rome? Click here and look at many other attractions >>

The photo above (Chiaia Luna beach) was taken from www.prolocodiponza.it